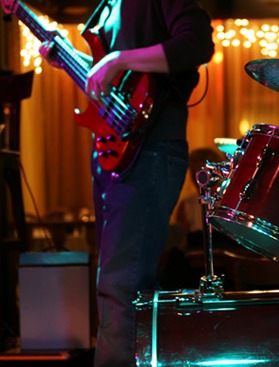 Gina "Poetic Chocolate" Batie  delivers an authentic, polished soulful sound. For almost a decade, fellow Houstonian native Randy Razz. guitarist have been putting the "R" and "B" in rhythm and blues.  "I'm nothing without my musicians," she said. "I'm truly blessed to work with such gifted, dedicated musicians." Her focus is social issues and social change.

Inspired by early R&B legends of the '60s and '70s, Gina  grew up swooning along with her radio. She cultivated her silky-smooth vocals in a gospel choir in her hometown of Houston, where she still performs on occasion. Gina Batie is the author of 2 books The Sensual Soul of Single Poet and most recently Poetic Chocolate poetry, prose and short stories. She’s produced a CD of poetry that’s also titled The Sensual Soul of a Single Poet.

She has performed at The Red Cat Jazz Café,  Pasonoes,  G’s & Z’s, The Villa, The Midtown Art Theatre, 1400 Bar and Grill, The Strand Street Theatre and Javica’s in Galveston, Texas, La Madeline’s in Sugarland, Texas, Central Art Center and Civic Center in Lake Charles, Louisiana.  She has performed with Ricky Smiley at the Improv Theatre, Encore Theatre and she’s done comedy at the Main Street Improv.  She is a member of the Kingdom Players a Christian theatrical group. She has performed in such plays as The Turner Classics, Mary, Mary, God’s Will But Not God’s Way, and she co-wrote and performed in the stage play Be Still and Know.

She has been featured in such publications as The Red Pub Magazine, Good Day Women’s Christian Magazine, and Stand Magazine. Presently she is the producer of the talk show America, Let’s Talk which focuses on positive programming for minorities and women. The shows segments align with financial, physical and emotional health. Her visual art has hung in the historic Carver Museum in San Antonio and in the Houston Community College Art Gallery.

She has won several awards for her work.  Writers of the Wood honored her for her poem dedicated to Nikki Giovanni where she spent an evening with the famous poet/playwright and Cyfair College where she was top ranked in a mock slam.  She was honored at the Texas Word Wrangler’s Festival featuring Texas authors.  She was also a member of the world renowned speech and debate team at Texas Southern University under the direction of Dr. Charles Freeman.

You may have heard her on 90.9 KTSU’s Roundtable discussion or with Lindsey Taylor.  She’s been a featured guest on both 90.1 KPFT and Perceptive Marketing’s online radio stations.

She was the artist liaison, coordinator and host of the Umoja Jazz and Poetry Show and host and coordinator of Kaleidoscope In Black artist show.  She is the founder of PURPOSE an adult writing group and Expressions Young Poets Society, a writing group for children 6 – 9 years of age.

Gina Batie has been teaching and nurturing students for 28 years.  She is a proud graduate of Prairie View A & M University where she earned her Bachelor of Science in Law Enforcement and later obtained a Master of Educational Administration and a Bachelor of Fine Arts degree in Graphic Design at the Art Institute of Houston.  She has taught in the Houston Independent School District for 14 of 23 years where she accomplished many wonderful things.  She was nominated for district Teacher of the Year, she was acknowledged in “The Leader” a local newspaper for her “Tea Time with Miss Batie” program, where she encouraged students to read for pleasure.  She was lead teacher for Language Arts, grade level chairperson for first grade and she was a Success for All Reading Trainer for the district.  She taught English as a Second Language second grade and first grade Gifted and Talented.  She has taught in the Fort Bend Independent School District for 5 years where she is a member of the Campus Based Leadership Team and was a proud member of the second grade team.  She is a visual artist, a poet and a modern day griot as well, a producer and publisher of the America, Let's Talk brand, the founder of the Black Girls are Beautiful Movement where our beauty breaks barriers, and we wear purple (our royalty) however one of her most serious and unwavering passions is teaching.  God took her in the direction of art. She is presently an artist and a television producer.

It's important to stay true to your roots. See me perform live in my hometown on Feb. 22!

​
"Chocolate Soul" just hit retail and online stores nationwide! Are y'all diggin' it?